Men's Struggle Between Career and Family

Is It Possible to Balance Career and Family?

I realized that I was missing out on so many things in my life… Earlier this year, Mohamed El-Erian, director of the PIMCO investment fund, resigned. The news became a sensation because PIMCO is one of the world's largest investors. But the main thing about it was his reasoning for resignation. 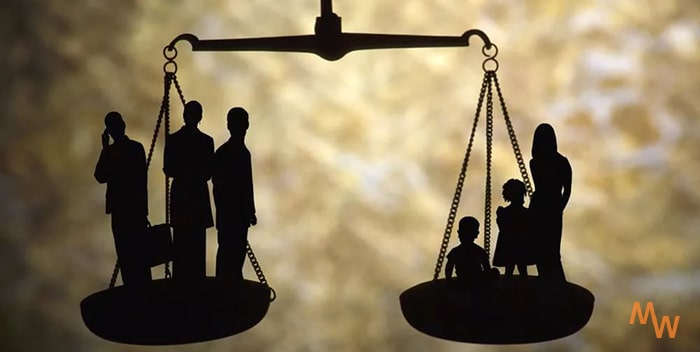 Here's how he explained the decision in his blog on the Worth site, “About a year ago I asked my daughter several times to do something if I'm not mistaken, it was about brushing her teeth. I was dissatisfied that we must endlessly remind her of this and expressed it in a rather strict tone. In response, she asked me to wait a minute, went to her room and came back with a piece of paper. It turned out she had made a list of important events in her life that I had missed because I was always busy with work.

That conversation affected me like a cold shower. The list included 22 items, starting with her first school day. There was the first football match in her life, a parent meeting and a Halloween parade. I felt terrible. Yes, I missed these events. But I had convincing reasons! Business trips, important meetings, urgent telephone calls ... Then it began to dawn on me that due to all these cases I had lost something much more important, my relationship with my daughter was damaged. I was losing this battle of career vs family.”

When faced with the choice of career or family, El-Erian decided to radically change his professional life. He now has part-time work, does much less business travel, and thanks to his flexible schedule, he no longer misses significant events in his daughter's life. “My wife and I take turns preparing breakfast for our daughter, take her to school. Sometimes I have time to pick her up from school and take her to extra classes. We talk to her about everything, do some things together. We are planning to go on vacation together,” El-Erian said in his blog.

As you can see, this task is a hard one, yet some men are capable of making the right choice, being able to balance career with family, but how should one go about making it work? What should a man choose, career or family?

Career vs. Family: Can You Make the RIGHT Choice?

El-Erian certainly has made the right choice, as he is still quite a prominent businessman, and it doesn’t seem like he has lost anything from his decision. It just seems like he has adapted his work style so that he can spend more time with his family, and we salute him on his great efforts and success in this.

Although some observers found the El-Erian’s explanation to be just a beautiful tale (the real reason for the resignation could be the disagreement between El-Erian and PIMCO co-founder Bill Gross), nevertheless, his post clearly affected the audience, as the people on the Internet still discuss it. The subject of their lively discussion is the topic of finding a reasonable balance between career and family. This topic isn’t really anything new, but it seems like businessmen spend lesser time at home every year, how can one combine the career and family and not lose a thing from it?

Of course, it has long been understood that this is an acute problem for actively working men, especially those in positions of responsibility. A rare interview with a successful businessman goes without the question, “How do you manage to combine work and family?” Lots of them admit that they are losing out on many things because of their work. First of all, it's about the joys of fatherhood. And if they do not take such radical steps as El-Erian, then at least they are trying to find a compromise and devote more time to their families. For example, Brad Smith, the father of two children, the head of iNTOiT, a software company, bitterly admitted that he had never been able to spend more than one day with his newborn daughters because of business trips. “Everything I did, I did for them,” he says. “But at some important points in their life, if I had the opportunity to turn back time, I would have behaved differently.” Becoming the head of the company, Smith started a tradition of joint Sunday lunches in the “Daddy-Daughter” format, during which they can discuss everything that concerns the daughters. For seven years, this routine has been strictly maintained.

Choosing Career over Family – Are You Going to End Up Alone?

Lots of men in the positions of power face this issue, some are capable of making it work, others are not. The same goes for women's struggle between career and family. Let’s see some examples of businessmen trying to make this hard choice of career vs family and the consequences of their decisions.

Mark Weinberger, Chairman of the Board of Directors and Chief Executive Officer of the largest audit company Ernst & Young, admits that he constantly feels guilty, he feels alone because whatever choice he makes – whether that is in favor of work or in favor of the family - he always misses something. So, for example, this year he had to refuse a trip to the World Economic Forum because, at that time, he had to take his daughter to California, where she studies at the university.

By the way, before taking office, Weinberger asked for permission from his kids and received it under one condition that he would not neglect his fatherly duties. Soon he had to be tested. It was in China immediately after his first appearance as head of Ernst & Young. When asked whether he would be photographed on the Great Wall of China together with thousands of company employees, Mark replied, "No," he urgently needed to fly to

Washington, where his daughter’s driver’s license test would take place the next day. “After that, I received hundreds of emails. Nobody mentioned my grand speech, only one thing got stuck in their memory: that I came back home for the sake of my daughter,” he laughs. “Then I realized how important it is for employees to look up to their leader. Unless you demonstrate your choice in favor of the family, people will not believe that they also have the right to do so.” When choosing a career over family, one must realize what they are sacrificing.

But not all men have enough boldness for it. Robb Fujioka, President, and founder of Fuhu, who makes tablets for children, believes that it’s important for employees not to lose touch with their children even while working.

Many here use the permission to take their kids to the office with them; there is a conference room for kids, there is even a pool with balls in it. But Robb cannot find a balance between work and family. “My daughter once came home from her friend’s house and said, “My friend has such a lazy dad! He comes home at the same time as her, plays with us, watches TV with us!", says Rob. “I listen and understand that this is how a normal family should be ...” He doesn’t remember the holidays when he was able to have full rest, even on holidays he has to work. “If we were to be waiting for the moment when I would not work, we would never have gone anywhere,” he states. “Our common trips are always a continuation of my business trips.”

In order for a man to not find himself alone and feel the guilt of being absent from his family’s life, he must know how to approach the process of balancing career and family.

How Combine Both Career and Family and Succeed? 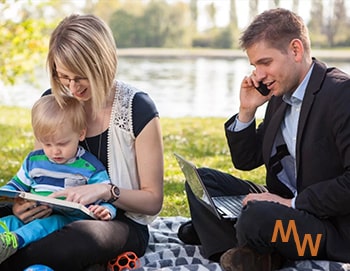 The same principle must be followed when a family member calls you by phone. Their lives must be no less important than a valuable client is for your company, a dialogue with whom you cannot interrupt.

If you have lost contact with family so much that you don’t know about what can you talk to them, contact your wife for help. You consult with the sales manager before a meeting with an important client, don't you? One must soberly evaluate and remember the real significance of the problems that he or his family members may face. At work, you may be rolling in money, and at home, your wife requires you to advise her in making a purchase, which costs ten bucks. No matter how difficult it may be, you must understand that this modest amount of money is as important to her as a million to your company. No matter how hard the process of balancing career and family may seem, it is well worth it.